Only in your embrace can it be,
the night turns to day,
the pain dulls away.

By your kiss, I quake,
blissfully numb,
to you I succumb.

In starry dreams we speak,
on pillowy clouds we dance,
cheek to cheek.

Perhaps one day we’ll meet,
and dance.
and speak.

Perhaps one day,
I’ll know you.
Posted by Anonymous at 11:12 PM No comments:

Always In Our Thoughts

I struggled to wake up this morning. Actually, I struggled to keep from waking up. It was one of those mornings where you open your eyes about a half hour before the alarm is supposed to go off and you try an try to fall back asleep but keep waking up every 10 minutes. During these brief intermissions from reality, I would slip into a mini dream. I recall two of them, specifically.

In the first, I was with a beautiful girl and we were on a bus. We weren't going anywhere that I can recall, exactly, but we were staring into each others' eyes. It was interesting because it wasn't real and I was aware of that fact in the dream. Then, BAM! I'm back to reality. Looking at the clock one more time, I try to fall back into dreamland once more.

The second dream was completely unrelated to the first. I was shaving in the bathroom, and my mom was strolling through the hallway. I asked her if my beard looked alright. She quickly examined it and said it was okay. This dream wasn't lucid as was the first. If it was, I would've tried harder to keep it going. Since most of my readers are close friends, you all know mom passed away in April, 2010. So anyway, these subconscious visits are welcomed any time.

Now, while at work today, a return customer came in to put down a payment on a large piece. Rob came out to greet him and asked him how his wife was. Guy replies with, "I lost her." Now, I kept my mouth shut. It wasn't clear if he was joking or if he meant what I thought he meant. But after a couple minutes of explanation, it turns out his wife was battling cancer for a long while and finally passed. As best as he could, he held his composure through the conversation, which included a very interesting detail; he mentioned he was expecting a visit from her soon. His background as a Christian leads him to believe that his late spouse will pay him a visit, somehow, within 40 days of her passing. This meant anything from a ghostly presence, voice, dream, etc.

Now, I'm not much for religion, but losing someone that close to you is not easy to deal with, so I was hoping in my heart that he would receive his wish. It's comforting to see someone who's no longer here for just a moment in time, even though the glimpse is fleeting.

When people are here, we sometimes accept their presence as infinite. Sad thing is, it's not. I wanted to tell the man that I saw my mom in a dream this morning, but didn't know how awkward the conversation would be, or if it would be any help to him to hear that from a stranger. Anyway, if you have people in your life that you love, let them know more often than not. It just makes sense.

Love,
Manoli
Posted by Anonymous at 10:05 PM No comments:

Things That Irritate Me

Posted by Anonymous at 1:38 AM No comments:

As you may know, I'm appalled by Lindt's recent decision to change their perfect 70% Intense Dark chocolate recipe. It's lacking where the original shined. It's sweeter and dumbed down for the masses. I have to find another brand. If you haven't read my letter to Lindt from May 3, click on the link below:

I was surprised to find an envelope in my mailbox so quickly, but was disappointed in the inevitable reply. My scanner doesn't work with my version of windows, so an iPhone pic will have to suffice. Click on the picture below to enlarge. 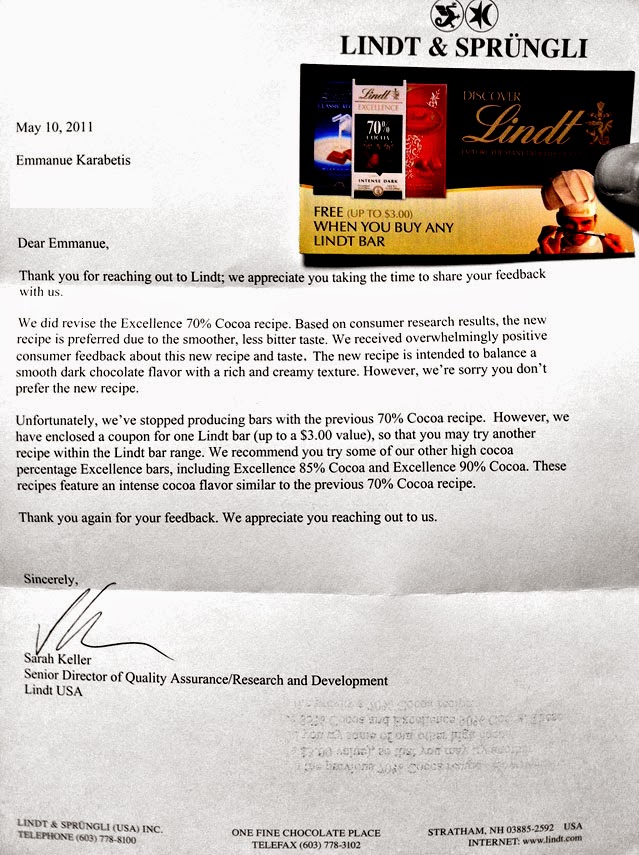 They were very cordial and the letter was actually signed by a human. But notice a few subtleties, including
So, thank you L&S for your stealthy reply and the beautiful coupon. But know this: I am waiting for that day when I open my front door to find a giant 70% Intense Dark Bar with that red satin ribbon wrapped tightly around the corners.

Love,
Manoli
Posted by Anonymous at 10:56 PM No comments:

So you like to weight train, but you need to incorporate some cardio to burn some extra fat. Like most "weight lifters" or whatever you wanna call us types, I do not want to waste 40 minutes of my day on a treadmill. I need an intense burn. Give me something that will feel excruciatingly painful for a fraction of the time and give me the same result. Here's the answer:


HIIT - High-Intensity Interval Training
Anyone who has tried programs like Beachbody's Insanity understands the feeling. You burn calories, increase your endurance, annnnnd thennnn you pretty much pass out. It's very rewarding in its own right. Click on the link above to get a deeper understanding of how HIIT works.

Now, say you know the ins and outs already. Here are a couple scenarios:
Here's one solution for anyone with an iPhone. It's an app called "Seconds." With it, you can customize your workouts in timed increments so you don't have to stop or reset a stopwatch or other timer. At 3 seconds before the next interval, you will get 3 beeps per second, then a long beep that signifies it's time to switch up. Very simple, right? Here's how it looks:

The app is very simple. Customizing workouts is fairly easy and self-explanatory, but it'll take some getting used to. I get a lot of use out of it, mostly every day, so check it out if you want to start making your own workouts. Oh, and you can play your music while working out... an added bonus.

Love,
Manoli
Posted by Anonymous at 8:44 PM No comments:

So I'm working out again, but trying to consolidate a couple workouts. It can get really irritating working on 1 or 2 muscles for 45 minutes. So here's an answer for that. I took 2 P90-X workouts (Chest & Back and Legs & Back) and combined them into 1 back-breaker. It's an Excel File, so most of you should be able to read it. I promise the link is safe!

I was at an amusement park in the middle of the ocean. We were on a track that held about 6 boats side-by-side and god knows how many in a line. One minute into the ride, a giant blow-up pirate ship emerges from the water and shoots its canons. My boat falls off the track. I have to swim back to the track while holding my boat... In the middle of the ocean, mind you! Eventually, I'm back on track and get through the whole ride, which included caves and Easter eggs (no connection). The end of the ride leads back to a cruise ship where, for some reason, there is an exact replica of my gallery. My boss and his wife are there and I have a ton of orders to fill. So naturally I start working, when I'm interrupted by 5 teenage girls who proceed to get in a line and flash me. What the hell is going on?! Oh, and don't forget the KGB tattoo that I got at my old elementary school. I don't know what I ate last night.
Posted by Anonymous at 10:01 AM 1 comment:

I understand there are more pressing matters in this world than the way my dark chocolate tastes but I'm wondering, SERIOUSLY wondering, why you, Lindt & Sprüngli, Master Chocolatier have found it necessary to change the 70% Intense Dark recipe to the 70% Smooth Dark formula.

Let's start with taste:
Onto Nutritional Value:
I work out often and watch what I eat. This changes my routine around a little bit, which doesn't ruin my life, but it all boils down to this:

WHY?! Is it the economy? Are you mad at me, specifically? Is it because I forgot our anniversary? It couldn't be that because we don't HAVE an anniversary! I miss my Intense Dark bars. Please put them back on the shelves. My 2 squares a day are what keep me sane in my health-food lifestyle.

Now understand, I'm not mad at you. I'll always love you, Lindt, so can't we work this out?

Yours always,
Emmanuel Z. Karabetis
Posted by Anonymous at 12:03 AM 4 comments:

What's This All About?

We're all different, unique. We all live separate lives and have varying opinions from everyone in our lives, but we can't help living on the same crazy planet. I'm on here to spew out some intelligence. Join me.

Past Blogs, In Order